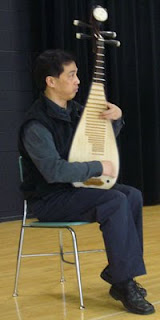 Two years ago, when pipa virtuoso Yang Wei came to Ann Arbor for a week as a visiting artist in residence, he visited Dr. Martin Luther King Jr. Elementary School for an all-school assembly. He talked about the history and evolution of the pipa, and how it is related to both the (European) lute and the (Middle Eastern) oud. He also told funny stories about cultural misunderstandings and how hard English was for him to learn when he first came to America. The kids—many of whom have immigrant parents for whom English is a second language—laughed and laughed when he described how confused he felt when people would ask him, “What’s up?” Not understanding the question, he would look up and answer,“Clouds? Sky?”

And then he played.

From Oh Susanna ("with a pipa on my knee") to classical Chinese songs filled with the sounds of canons firing, the clash of swords, galloping hooves, and the screams of horses, the kids got it. They heard it all. One man sitting alone on a bare stage with a simple musical instrument held the attention of 450 elementary students, from kindergarten to fifth grade. (click on link for more)