My story with Bill Kubota at DPTV One Detroit (I'm on tv!)

January 2022 saw more Afghanistan families evacuating their Middle Eastern homes to begin new lives in America. More than a thousand Afghan refugees are expected to seek shelter in parts of Michigan including the state's West side, Lansing and Ypsilanti, near Detroit. PBS NewsHour Community Correspondent Frances Kai-Hwa Wang reports for One Detroit and PBS NewsHour from Eastern Michigan University's campus in Ypsilanti, where Jewish Family Services of Washtenaw County has been helping coordinate the refugees' arrivals and housing. Watch "One Detroit" Monday and Thursday on Detroit Public TV at 7:30p ET. Or catch the daily conversations on our website at https://OneDetroitPBS.org, Facebook at http://facebook.com/onedetroit, Twitter at https://twitter.com/OneDetroitDPTV and Instagram @One.Detroit. Posted by Frances Kai-Hwa Wang at Tuesday, January 25, 2022 No comments:

1990 Institute Newsletter Vol 2 Iss 1 What will you do on this MLK National Day of Service for America?

My latest essay for 1990 Institute Vol 2 Iss 1 asking, What will you do on this MLK National Day of Service for America?
1990 Institute Newsletter Vol 2 Iss 1
Posted by Frances Kai-Hwa Wang at Friday, January 14, 2022 No comments:

The Asian/Pacific Islander American (A/PIA) Studies Program at the University of Michigan mourns the loss of Jim Toy, a pioneering LGBTQ+ civil rights activist, who passed away on January 1, 2022 at the age of 91.

Jim Toy was born in 1930 to a Chinese-American father and a Scottish-Irish American mother, and over the next nine decades, went on to become one of the most significant LGBTQ+ leaders in the history of the University of Michigan and southeastern Michigan. In a 2015 interview with journalist and A/PIA Studies lecturer Frances Kai-Hwa Wang, Toy reflected on the difficulties of navigating an antagonistic and discriminatory environment as a queer person of color. Seeing racial and LGBTQ+ struggles for equality as intertwined, Toy explained, “Asian American and TBLGQI issues intersect in all our struggles for justice and equality, our attempts to gain and retain our human and civil rights.”

Toy first joined the University of Michigan as a Master's student in Clinical Social Work, where he quickly made a powerful impact on and off campus. As a founding member and secretary of the Detroit Gay Liberation Movement (DGLM), Toy later co-founded the Ann Arbor Gay Liberation Front (AAGLF). After the advocacy of the AAGLF, the University of Michigan administration established the Human Sexuality Office (HSO), the first staffed office for queer students at an institution of higher learning in the U.S. Toy, alongside campus leader Cyndi Gair, were the office’s very first staff members. For over two decades, Toy helped build the HSO (eventually renamed the Spectrum Center) into a safe space, a counseling center, and advocacy organization for LGBTQ+ students and university members amidst a systemically discriminatory environment. In 1972, Toy and the HSO began a protracted twenty-year battle to include "sexual orientation" as a category protected from employment and educational discrimination in the University by-laws. Off campus, Toy was instrumental in drafting both the pioneering Ann Arbor Lesbian-Gay Pride Week Proclamation and Human Rights Ordinance, one of the first municipal non-discrimination ordinances in the U.S. to prohibit discrimination based on sexual orientation. His work at both state and national levels continued as a member of the Task Force on the Family and Sexuality of the Civil Rights Committee of the Michigan State House Representatives; a board member of the Michigan Organization for Human Rights; and cofounder of Integrity, a gay Episcopal organization. He was tireless in efforts to build institutions of support for LGBTQ+ community members, founding the Washtenaw County LGBT Retirement Center Task Force, Washtenaw Rainbow Action Project, and Transgender Advocacy Project, among other organizations.

Jim Toy's contributions to the LGBTQ+ movement has been recognized throughout the years, including the Lifetime Achievement Award from the National Association of Social Workers. In 2011, the Washtenaw Rainbow Action Project was renamed the Jim Toy Community Center, and just a few years later, Ann Arbor declared April 29 as “Jim Toy Day.” With support from several campus communities including A/PIA Studies, the United Asian American Organizations, and the Spectrum Center, Toy received an honorary degree from the University of Michigan at its 2021 Spring Commencement. As a regular guest speaker in Roland Hwang and Frances Kai-Hwa Wang’s course on "A/PIAs in the Civil Rights Movement,” Toy continued to share his experience and inspire a new generation of UM students and activists.  As Roland Hwang explains, “Jim Toy is a person who lived his life in many ways before we were ready for him… he has taught us all to be kind to one another, to live with grace, joy and tolerance, as we march toward the goal of true equity and equality for all.”

We are forever grateful for the work that Jim Toy has done to improve our corner of the world, creating a safer and more equitable space for the LGBTQ+ communities locally and nationally, and serving as a model of courage and commitment to social justice.

Posted by Frances Kai-Hwa Wang at Friday, January 07, 2022 No comments:

My article for PBS NewsHour re Jim Toy

“Jim Toy’s life is a reminder that LGBT history and LGBT civil rights were also made here in the Midwest, and that Asian Americans and other people of color were a critical part of that movement,” Ian Shin, a University of Michigan assistant professor of history and American culture, told the PBS NewsHour. 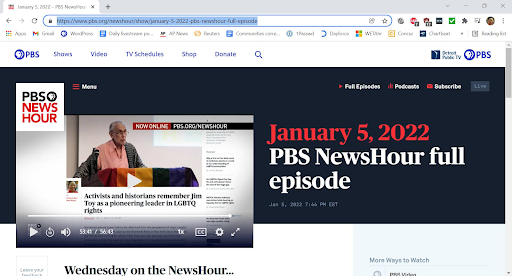 Posted by Frances Kai-Hwa Wang at Wednesday, January 05, 2022 No comments: