Cover: Where the Lava Meets the Sea--Asian Pacific American Postcards from Hawai‘i 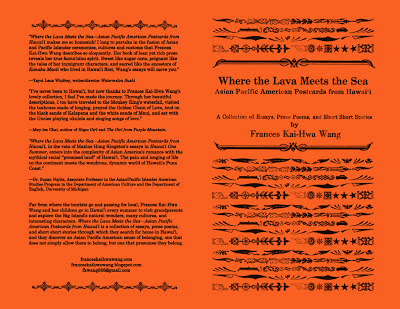 Thanks to my ebook team (M) for this cover image! Now available at Blacklava.net!

The binding is hand-sewn...all by myself...in the dark...during a blackout...in the middle of a snowstorm...while watching the Lord of Rings trilogy for the first time...and while listing to MLK Day lectures...The book design is full of antique fonts and dingbats and really cool old-fashioned printing techniques. Thanks to Laura Beyer of Wax Wing Press!

“Where the Lava Meets the Sea—Asian Pacific American Postcards from Hawai‘i makes me so homesick! I long to partake in the fusion of Asian and Pacific Islander ceremonies, cultures and customs that Frances Kai-Hwa Wang describes so eloquently. Her book of lean yet rich prose reveals her truekama‘aina spirit. Sweet like sugar cane, poignant like the tales of her immigrant characters, and sacred like the ancestors of Kanaka Maoli who lived in Hawai‘i first, Wang’s essays will move you.”
—Yayoi Lena Winfrey, writer/director Watermelon Sushi

“I’ve never been to Hawai‘i, but now thanks to Frances Kai-Hwa Wang’s lovely collection, I feel I’ve made the journey. Through her beautiful descriptions, I too have traveled to the Monkey King’s waterfall, visited the teahouse made of longing, prayed the Golden Chain of Love, trod on the black sands of Kalapana and the white sands of Maui, and sat with the Uncles playing ukulele and singing songs of love.”
—May-lee Chai, author of Hapa Girl and The Girl from Purple Mountain.

“Where the Lava Meets the Sea—Asian Pacific American Postcards from Hawai‘i, in the vein of Maxine Hong Kingston’s essays in Hawai‘i One Summer, enters into the complexity of Asian America’s romance with the mythical racial “promised land” of Hawai‘i. The pain and longing of life on the continent meets the wondrous, dynamic world of Hawaii’s Puna Coast.”
—Dr. Susan Najita, Associate Professor in the Asian/Pacific Islander American Studies Program in the Department of American Culture and the Department of English, University of Michigan

Far from where the tourists go and passing for local, Frances Kai-Hwa Wang and her children go to Hawai‘i every summer to visit grandparents and explore the Big Island’s natural wonders, many cultures, and interesting characters. Where the Lava Meets the Sea—Asian Pacific American Postcards from Hawai‘i is a collection of essays, prose poems, and short short stories through which they search for home in Hawai‘i, and they discover an Asian Pacific American sense of belonging, one that does not simply allow them to belong, but one that presumes they belong.