Adventures in Multicultural Living--Ode to Halloween Costumes, Plus Warning - AnnArbor.com 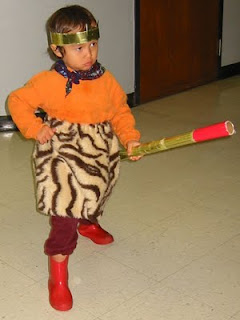 As I child, observing the world as it was presented to me by the mainstream, I often decided to shut doors myself before anyone actually told me to. Growing up in the age of Farrah Fawcett, I knew that one had to be blond in order to be beautiful, by definition. My horseback riding friends and I knew from statistics that at ten years old we were already too tall to ever become jockeys. Common sense told me that I could never become a country-western singer, no matter how many pairs of cowboy boots I owned. Even school assignments like, “If you could live anywhere in time, where would it be?” were problematic because I knew that as a girl, and as a Chinese girl, I would not be able to just “drop in” anywhere in history.

However, once a year, I could be whatever I wanted to be, construct whatever image or story I wanted for myself, travel backwards and forwards in history and literature, creatively cross over any social barriers. It was also a chance to pretend to be pretty and show off how smart I could be.

One night a year—Halloween. (click on link for more)