Islamophobia: Why Are More Journalists Using This Word?

Curious to be mentioned by name, along with Chuck Todd, Nicholas Kristof, and John Kerry. Does this mean I'm famous yet? lol


Major outlets like New York Times and Washington Post have started using “Islamophobia” more often, and do in similar ways — in op-ed headlines and in the text of articles. We’ve also seen it recently employed in headlines elsewhere: op-eds in TIMEand Newsweek, pieces from CNN, CBS, and the BBC. Frances Kai-Hwa Wang and other NBC reporters use “Islamophobia,” as does MSNBC, which covered Islamophobia in-depth even before the major jump in incidents in late 2015.

Islamophobia: Why Are More Journalists Using This Word? 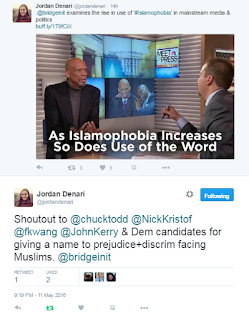 Update: After a few days, this is still just so funny to me...