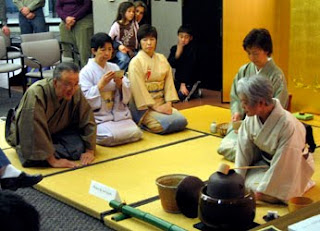 A girlfriend was recently reminiscing about the Friday afternoon high teas at Smith College, a tradition held over from a previous era, although by the time she was there, most of the young women came to high tea wearing jeans rather than dresses and white gloves. Still, there was something warm and reassuring about coming home at the end of a long week and finding pots of tea and loads of cookies (especially the cookies) prepared and waiting for you, welcoming you home.

At the Japan Cultural Festival last weekend, I slowed down (for once) long enough to watch a Japanese tea ceremony. A younger kimono-clad woman carefully and meticulously prepared and presented a bowl of tea to an older woman. She brewed the water on an old fashioned brazier, scooped the water out with a long-handled bamboo ladle, stirred the tea with a little bamboo whisk, and poured the tea into a wide-mouthed bowl. Her body movements were disciplined and deliberate. The older woman sat silently and waited patiently for her tea. The relationship between the women could be read like a dance, the care and respect with which the younger woman made and served the tea to the older woman was moving. Everything was in the details, details that nobody has time for anymore. (And so nice to see during Women’s History Month.) Off to the side of the tatami stage, several kimono-clad women made more of the bitter green tea for the audience members and offered each cup with both hands raised. (click on link for more)