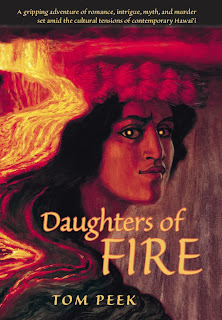 Journey into the deeper beauty and volcanic power of Hawaiʻi

Look beyond the idyllic tourist image of Hawaii and explore the deeper beauty and sacred heritage of Hawaiʻi and its volcanoes through its cultural traditions, history, literature, music, and art with authors Tom Peek and Frances Kai-Hwa Wang, and artist Catherine Robbins. The program will include lively author readings, robust cross-cultural discussion, nature photography, and volcano-inspired art. Light Hawaiian snacks will be served.

Hawaii-based writer Tom Peek will read from his new novel, Daughters of Fire, a gripping story of interracial and intercultural romance, political intrigue, myth and murder, set atop the volcanoes of the Big Island of Hawaiʻi and filled with complex characters that reveal the true heart of Hawaiʻi. Ann Arbor-based writer Frances Kai-Hwa Wang will read from her new chapbook, Where the Lava Meets the Sea—Asian Pacific American Postcards from Hawai‘i, in which she explores the natural wonders, many cultures, and interesting characters of Big Island as she searches for home in Hawai‘i, and instead discovers an Asian Pacific American sense of belonging. They will be joined by Hawaii-based painter Catherine Robbins who will discuss her volcano-inspired paintings and artistic practice. Together, they will discuss the cultural and environmental challenges facing Hawaiʻi, as well as the Midwest, today. This program will appeal to anyone interested in Hawaiʻi, intersecting cultures, fragile landscapes, environmental impacts of development—and awesome volcanoes.

Tom Peek lived his early life on the Upper Mississippi on a backwaters island of Minnesota river folk, beaver, and ancient burial mounds. After hitchhiking by boat through the South Seas, he settled on the island of Hawai'i, where he’s lived for two decades. There, he’s been a mountain and astronomy guide on Mauna Kea and an eruption ranger, firefighter, and exhibit writer on Kilauea, working closely with Hawaiian elders and cultural practitioners on both volcanoes. For more information visit www.daughtersoffire.com

Frances Kai-Hwa Wang is a second generation Chinese American originally from California who now divides her time between Ann Arbor and the Big Island of Hawaii. She has written for AnnArbor.com, AnnArborChronicle.com, and Ann Arbor Observer, and she is currently a contributor for New America Media's Ethnoblog, Chicago is the World, Pacific Citizen, InCultureParent.com, and HuffPost Live. She writes and speaks about multicultural issues, and she team-teaches Asian Pacific American History and the Law at the University of Michigan and the University of Michigan Dearborn. She is the author of Imaginary Affairs—Postcards from an Imagined Life and Where the Lava Meets the Sea—Asian Pacific American Postcards from Hawaii, available at Blacklava.net. Check out her blog at franceskaihwawang.com.

Catherine Robbins, a self-taught artist and former eruption ranger at Hawaiʻi Volcanoes National Park, creates oil paintings inspired by the wonders of nature. She has lived on the verdant windward side of the island of Hawai‘i for over thirty years. Exploring the natural world, from mountaintops to coastal lava flows, taught her to listen to the greater forces, and inspired her to paint places that she knows well and loves. Catherine’s work is collected internationally and is represented by galleries on the island of Hawaiʻi. Her Kilauea painting series was featured in the Volcano Art Center Gallery’s “Observation/Inspiration Exhibition” held in 2012 to commemorate the 100th anniversary of the Hawaiian Volcano Observatory, and on ABC’s nationally-televised “Born to Explore” program. In her rainforest studio, a few miles below Kilauea’s erupting summit crater, she occasionally hears loud booms from the volcano while listening to her intuitive sense of the place to which she gives voice with paint on canvas. More at http://catherinerobbins.com/.

UPDATE: We will be joined by hula kumu June Yoshiko Kaililani Ryushin Tanoue of Halau i Ka Pono hula school in Chicago who will do a Pele (volcano) chant. More about her here: http://www.halauikapono.org/about.htm
Posted by Frances Kai-Hwa Wang at Monday, September 09, 2013