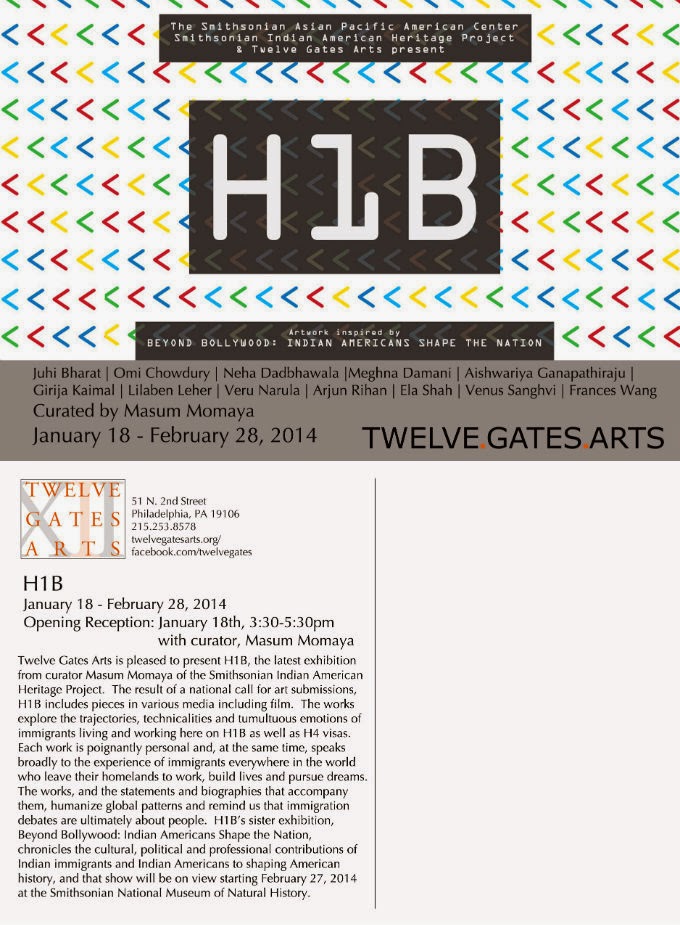 Twelve Gates Arts is pleased to present H1B, the latest exhibition from
curator Masum Momaya of the Smithsonian Indian American Heritage
Project. The result of a national call for art submissions, H1B includes
pieces in various media including film. Early in 2013, while completing
the exhibition Beyond Bollywood: Indian Americans Shape Nation for
the Smithsonian Institution, Momaya noticed a gap. She wanted to
share the experiences of South Asians living and working in the United
States on a temporary work visa – the H1B. But, rather than just
analysis, prose and policy debate, how could this be represented
visually?

In line with Twelve Gates Arts’ mission of showcasing South Asian arts
bound by the sensibilities of a transnational identity and promoting
projects crossing cultural and geographical boundaries, the works in
this exhibition explore the trajectories, technicalities and tumultuous
emotions of immigrants living and working here on H1B and H4 visas.
Each work is poignantly personal and, at the same time, speaks
broadly to the experience of immigrants everywhere in the world who
leave their homelands to work, build lives and pursue dreams. The
works, and the statements and biographies that accompany them,
humanize global patterns and remind us that immigration debates are
ultimately about people.

H1B’s sister exhibition, Beyond Bollywood: Indian Americans Shape the
Nation, chronicles the cultural, political and professional contributions
of Indian immigrants and Indian Americans to shaping American
history; that show will be on view from February 27, 2014 - February
2015 at the Smithsonian National Museum of Natural History.

Juhi Bharat was born in India in 1980. She currently resides in New
Jersey on an H4 Visa. Juhi has a background in fine arts and previous
work experience in several print media publications in the U.S. and
India. She recently graduated with an associate’s degree in 3D
Animation.

Jyoti Omi Chowdhury was born in Dhaka, Bangladesh. He eventually
wound his way to Harvard, where he began to research and write on
genocide, gender equity, war theory, and liberalism and found an
outlet in photography. He has had solo shows in Ann Arbor, Boston,
and Berlin; and his work has been featured in galleries in Chicago,
Indianapolis, Prague, Munich, and Abu Dhabi.

Neha Dadbhawala is a painter who experiments with colors and
different mediums; doing so while keeping the integrity of the
fundamental forms of traditional Indian art alive, is the main objective
of her work. Neha’s work fuses old techniques with a modernistic
approach. She has done solo exhibitions in San Francisco and San
Jose, California and has shown her work at the India Art Summit.

Meghna Damani is a Mumbai-born artist, filmmaker and activist. She
migrated to the US in 2002, leaving behind a successful modeling and
advertising career. Inspired by her own struggle on a dependent
spouse visa that denied her work authorization, she has also built a
social media campaign and grassroots movement to lobby for relevant
policy change. Meghna is founder of Treasure Tower Films, a
multi-media company whose mission is to make films that celebrate
human potential.

Aishwariya Ganapathiraju holds a Master of Arts in Comparative
Literature and Cultural Studies from the University of Arkansas,
Fayetteville. She is academically and artistically interested in identity
creation and manifestation in a changing global world. Primarily a
wordsmith, this is her first foray into visual art.

Girija Kaimal was born and raised in India and began her professional
career as a textile designer. She is also an art therapist, an education
researcher, a professor, a wife, and, a mother. Art for her is a chronicle
of places she has been to, people she has met, things she has seen,
and, what they have meant to her.

Lilaben Leher was born and raised in Chicago. She currently lives in
the Chicago area with her two children, husband and mother-in-law.
Her art has been mainly focused in the commercial realm, and she
teaches traditional & digital drawing courses at the college level.

Veru Narula is a visual artist focused on globally conscious paintings
and the intersection between the representational, digital and
traditional oil media. He learned painting as an adolescent from both
his parents and later studied at Columbia University and the School of
Visual Arts. His work has been shown in exhibitions at many cultural
institutions, including the Queens Museum of Art, the Hammond
Museum, Exit Art, Santa Monica Art Studios, Tarnish & Gold Gallery, the
Elizabeth Arts Foundation, and James Cohen Galley.

Arjun Rihan is an animator and filmmaker based in Oakland,
California. He was born and raised in Pune, India and moved to
Singapore at the age of sixteen to attend high school. He moved to
the United States for college, and he is currently employed as a
Camera & Staging Artist at Pixar Animation Studies. Arjun is on his
third H1B visa. His work has been exhibited at festivals and venues
around the world, including the San Francisco international Film
Festival, Annecy International Animated Film Festival, and the Centre
Pompidou, Paris.

Ela Shah was born in Bombay, India. She earned a bachelor’s degree
in Psychology and a Diploma in Fine Arts from India, as well as a
master’s degree in Sculpture from Montclair State University. Her work
has been exhibited in the Museum of Modern Arts in New Delhi,
Queens Museum of Art in New York, William Benton Museum in
Connecticut and other museums around the country.

Venus Sanghvi was born in Mumbai, India and comes from a Hindu
Jain family. She earned her MFA from Academy of Art University in San
Francisco. Recently, her work was including in a museum quality
coffee table book; her painting was also featured on a billboard in an
“Art Takes Time Square” competition. She has participated in
numerous shows in India and the United States.

Frances Kai-Hwa Wang is a second-generation Chinese American from
California who has lived in Nepal, China, and Taiwan, and now divides
her time between Michigan and the Big Island of Hawai‘i. Trained in
academic philosophy, she has worked in international development,
nonprofit administration, small business start-ups, and ethnic new
media. She teaches at the University of Michigan and is the author of
Imaginary Affairs—Postcards from an Imagined Life and Where the
Lava Meets the Sea—Asian Pacific American Postcards from Hawaii.

Masum Momaya has been Curator of the Indian American Heritage
Project at the Smithsonian Asian Pacific American Center since 2012.
Prior to joining the Smithsonian, Dr. Momaya was a curator at the
International Museum of Women and engaged in curatorial work for the
for the Indo-American Heritage Museum. She holds a PhD in Human
Development and a master’s degree in Education from Harvard
University, a bachelor’s degree in Public Policy and Feminist Studies
from Stanford University, and she pursued advanced studies in the
University of Oxford’s Development Studies Program.